Our Company > Milling: A Brief History 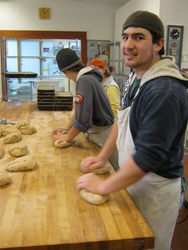 Grinding wheat berries into flour began as early as 6700B.C. when ancient civilizations used a stone bowl (mortar) and a long stone (pestle) to make flour for bread. Later came larger stone mills powered by livestock. Then began the use of wind and water to power mills. The stone ground mills of the past produced a more nutritious honest flour than the modern roller mills used today.

Prior to the Industrial Revolution (1900’s), most flour was milled locally and baked into bread at home. Most families had access to fresh whole grain flour. Since flour can not be stored for a long time only enough grain was milled each day to meet the needs of the community. As our society evolved and people moved further away from the mills it became more difficult to provide fresh flour to far away families and bakeries. The wheat in it’s kernel form poses few storage problems. Once it is ground into flour, however, the oil in the wheat germ turns rancid and the flour oxidizes (looses nutrients) in a short time.

Ah! But there was an “answer”. As technology increased, sifting the wheat became more thorough. This enabled the large conglomerate mills to remove the bran and the wheat germ ( along with the vitamins and minerals) from the flour to produce a more stable product that could be
stored longer for distant shipping. This process appeared to be a tremendous advance in technology until researches in the 1930’s began connecting the “dots” as an increase in disease with the onset of the “new “ milling process.Hence we now have “fortified” flour.